What happens when I procrastinate? Well on Friday, I made shortbread.

This is the shortbread we always make at home. The recipe is a Be-Ro one; however, as it happens with many things I bake, I couldn’t resist chucking in some chocolate. 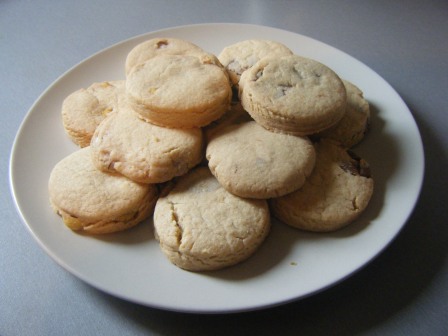 I’m a lazy baker in some ways. I never bother sieving flour, for example. So we start here: 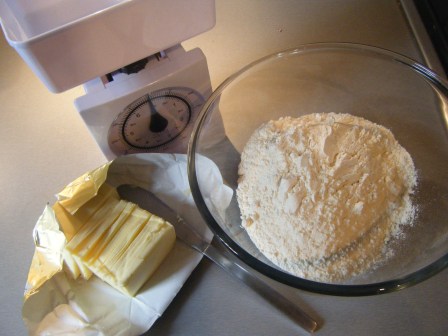 Rub together 250g plain flour and 175g butter until it looks like breadcrumbs. Voilà:

Add 75g of sugar. (Some people put it in with the flour at the beginning before rubbing in the butter.) I improvised by adding chocolate buttons to half the mixture and Smarties to the other. Then add a splash of milk until you can bind it together as a dough.

I forgot, once again, that we do not have a rolling pin, so had to use a glass. I realise now that that sounds like a very stupid idea, so be careful if you try it yourself. It made it easy to create even shapes though. (Except the last couple of pieces, which you can see are a bit wonky. I ate those before anyone saw them.)

The oven is where the shortbread can go very wrong. I admit this is a recipe I’ve made many times before, so it doesn’t really count towards goal 3, but only two batches have turned out perfectly. The same amount have been so disgustingly vile and inedible (i.e. the oven was hot enough for the butter to melt out, but not to cook anything else. Rank) that this definitely qualifies as a hit or miss recipe. It should go in a 165-degree (fan) oven for 30 minutes, but it was a bit much for this batch. The first photo actually looks quite good, but it was the tiniest bit hard on the outside. I’d try and catch it just before it goes golden. I realise this might require an element of luck/being psychic, but it will continue baking for a little while after you take it out the oven, so it means you should have perfect shortbread all the way through.

Well, since this recipe doesn’t technically count towards the 13 goals, let’s have another two minutes off and I’ll quickly update you on a couple of other goals. There’ll be a proper update in a couple of days, since that’ll be half of the year gone. (Scary!)

Great things from the past month:

My birthday! I have wonderful friends and it was great to see so many of them on my birthday.

Booking a trip to London in September with my sister. It will actually be the greatest holiday ever: seeing Wicked, visiting the Harry Potter studios, attending the McFly 10th-anniversary concert, and doing some touristy things over three packed days. That is basically all of my very favourite things. (Except Formula 1, of course. The price of a one-day grandstand ticket equals this entire trip.)

Also: being selected as a Marie Curie volunteer, visiting Jen in Chippenham and seeing McFly, visiting lots of new tourist attractions, and little things like brilliant music and discovering Nina Nesbitt, and great TV shows like The Mindy Project and Nashville.

Clare, the Working Woman and I had a mini movie night yesterday and watched (the very earnest, slightly cheesy, but lovely) The Sisterhood of the Traveling Pants, and there’s a great quote in it that suits times like these:

‘Maybe the truth is there’s a little bit of loser in all of us, you know? Being happy isn’t having everything in your life be perfect. Maybe it’s about stringing together all the little things, like wearing these pants or getting to a new level of Dragon’s Lair – making those count for more than the bad stuff.’

2 thoughts on “Sweet and Simple Shortbread”