3. Learn to cook a three-course meal, and throw a dinner party to prove it.

It only took eleven and a half months of consideration (and procrastination) but I finally made a three-course meal for my friends.

For the starter, I had thought about making potato skins. Then I remembered that the last time I tried to make these, it took longer than you should probably spend preparing a main course. So I opted for garlic bread. I half-sliced the baguette so that I could apply the mixture of butter, garlic purée and mixed herbs, then put it in the oven for ten minutes.

Another terrible photo. I’m improving my photography as part of next year’s goals, OK?

I put the main course in at the same time: roast chicken, roast potatoes and carrots. Not a full chicken, I should add, and the roast potatoes were already prepared. So essentially I heated the different elements of the main course to produce a nice meal with a lot of help from Mr Marks and Mr Spencer. I even bought ready-made mashed potatoes (who stoops so low?) that I forgot to heat up, so these were shoved in the microwave as we dished up the rest. 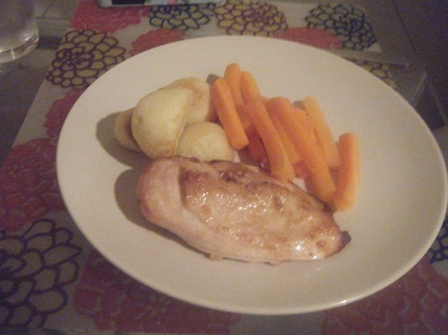 Should have made gravy…

My masterpiece was the dessert – a large chocolate brownie.

I got the recipe from the BBC website, only I mixed the dark chocolate with milk chocolate. I really want to try this using a chocolate orange or white chocolate chips, but my first attempt was not the time to experiment! I also didn’t bother adding the chocolate top as I made this while the main was in the oven, so there wasn’t enough time for the brownie to cook, cool and set if I topped it with chocolate too. It wasn’t so gooey that it came apart on the plate, but wasn’t really hard and cakey like you might get in a restaurant if it’s been defrosted. It’s hard to tell from the photo, but it was kind of perfect!

Good, if I say so myself!

There we have it! The girls said it was all very good. I could have started from scratch with the main course, but you can buy some nice stuff pre-prepared. (Just be careful: I very nearly spent £6 on different kinds of potatoes because I was so tempted by them all.)

I’m not sure I’ll be offering to cook again any time soon, but I’m definitely going to make more brownies. And I can finally check this pesky goal off my list!

2 thoughts on “My Three-Course Meal”