We arrived in Memphis in the late afternoon. There was just enough time for a quick tour of the area around the hotel, and the streets we would need to know, before getting ready for our night out.

Our trek leader took us to Charles Vergos’ Rendezvous, one of the most well-known barbecue places in Memphis. Then we headed to Beale Street. 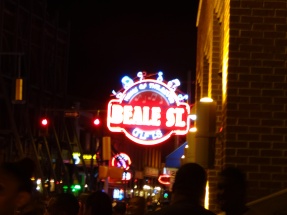 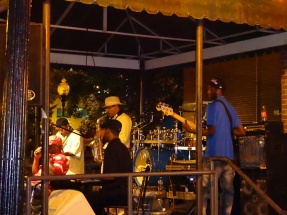 Some kind of motorcycle event meant the place was packed, even though it was a week night, and the atmosphere was amazing. We listened to a band in a square just off the street, and they were obviously encouraging people to tip them. Two women went up to tip between songs, and the band asked where they were from, and when they said, ‘Scotland’, our group cheered so loudly on my behalf that the women came over to find the fellow Scot and have a chat. After that, we listened to a couple more street performers, saw Elvis, then I got to sing 500 Miles on Beale Street! (In a karaoke bar, of course.) 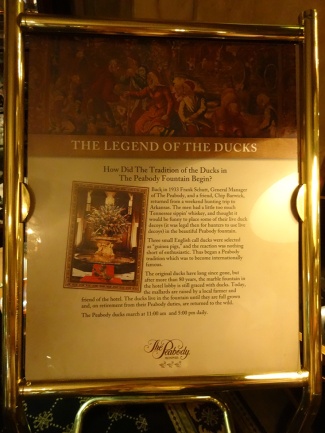 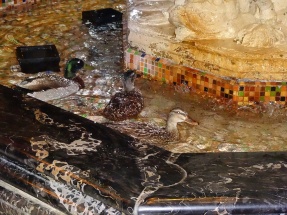 The next day was packed. First up was one of the more bizarre moments of the trip, when we went to a swanky hotel… to watch ducks parade out of one of the elevators towards the fountain in the lobby, where they spend the day swimming. This was the Peabody Hotel, and I know some of you will have heard of it. Guest Duckmasters (I am not making this stuff up) have included Oprah Winfrey, Kevin Bacon, Patrick Swayze and even my beloved Chip Esten. This started back in 1933, when a couple of guys drunkenly thought it would be funny to put ducks in the fountain, and every day since, at 11 a.m. and 5 p.m. these ducks parade into the fountain and back out again. When not in the fountain, they have a Royal Duck Palace on the rooftop made from marble and glass, worth $200,000. (I swear this is true – there’s more info here.) They do not serve duck at this hotel.

We then visited the Civil Rights Museum, which was eye-opening. It’s hard to believe life was like that until so recently, and the steps that still have to be made. 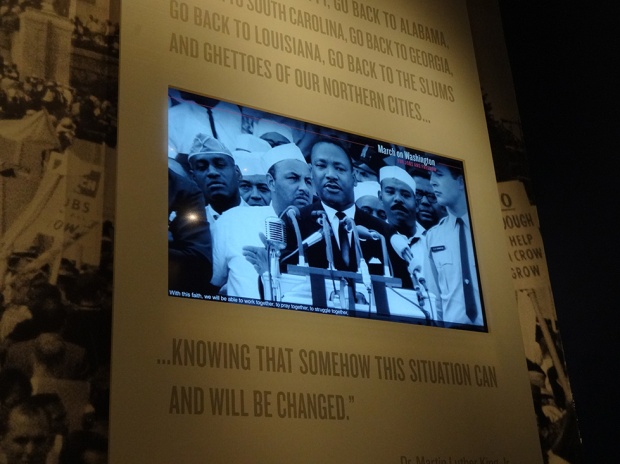 It is incredibly well put together – by far one of the best museums I have ever been to. The exhibitions look fantastic and modern; there is lots of multimedia used. However, it was very emotional, as one of the final exhibitions describes Martin Luther King’s final hours, plays his last speech (‘I’ve seen the promised land’), and displays the room where he was assassinated. I think anyone visiting Memphis should take the time to visit here.

Likewise, in the afternoon, there is a rather famous house you have to see when you’re out Memphis-way – Graceland, home of the King. 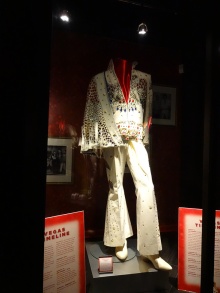 We saw displays of his private jets, his costumes, his many cars (including the pink Cadillac) and then we went over to the house itself.

The décor is… striking! An audio guide gives lots of information all the way round, but I don’t remember most of it – what I do remember is the impression that the house left. It is unchanged from when he lived here, so there is an element of it being behind the times, but it must surely have been a bit out there even at the time. The living sets the tone, decorated in white and turquoise with stained-glass panels. The Jungle Room is perhaps the most famous, with all the animal prints, a little waterfall, and carpet on the ceiling. However, there was one plain, yet impressive, room lined entirely with gold records. It was great to wander along and see just how many hits he had. Finally, the visit finishes with a trip to the Meditation Garden, where Elvis, his parents and grandmother were buried.

It had been a busy day in Memphis, but it wasn’t over. That night, we returned to the Peabody Hotel for a rooftop party, and had the most amazing time. It was an 80s band playing, and initially we were sceptical. Then they started playing hit after hit – I Want You to Want Me, Girls Just Wanna Have Fun, Hey Mickey – so we couldn’t leave!

Along with Nashville, Memphis was part of one of the best weeks of the trip, along with New Orleans, which I’ll write up soon.

Any other must-see places when in Memphis? If I ever get the chance to go back, Sun Studio is definitely on the list!

4 thoughts on “Walking in Memphis”