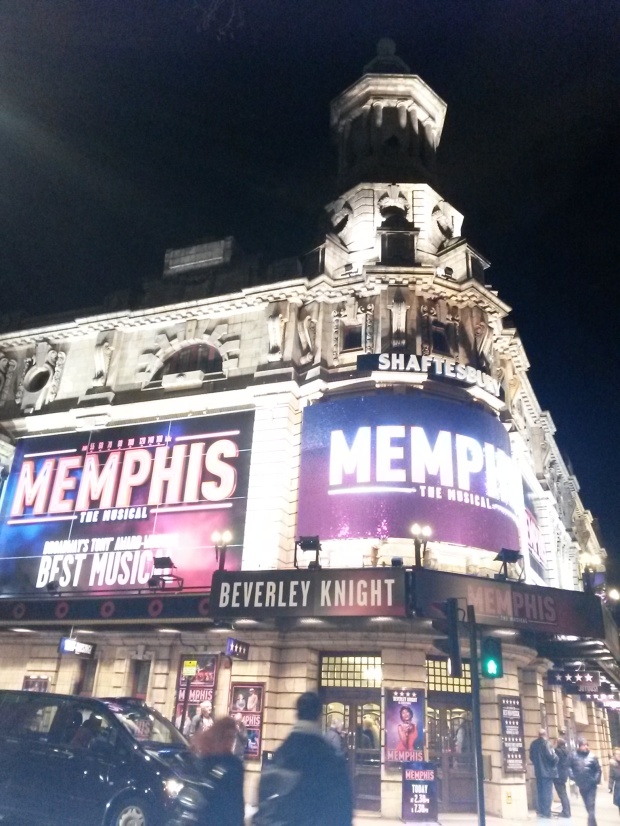 I had seen the posters for the musical Memphis all around the Underground, and was interested to see it simply because it was a musical. It wasn’t top of my list, I knew nothing about it, and no one I knew had seen it.

My friend was visiting last weekend and we knew we wanted to see a show, but the only big musical I hadn’t seen was Miss Saigon, and she had. It was actually the girl at the TKTS booth in Leicester Square that recommended Memphis and I have to say she has excellent taste.

The musical is set in Memphis, funnily enough, in the 1950s, when the issue of segregation starts to be addressed through music and the radio. Beverley Knight plays Felicia, a club singer, who dreams of being played on the radio. Killian Donnelly plays Huey Calhoun, a wannabe DJ who says he’ll make it happen.

Beverley Knight has an incredible voice, which she gets to show off in up-tempo numbers and the brilliant ballad ‘Love Will Stand When All Else Falls’, which I actually recognised once I’d heard it – it must have been used to advertise the show. However, the entire cast is fantastic. I could listen to Rolan Bell, who plays her brother, Delray, all day! Huey’s mother turns out to be comedy gold. My standout performance, though, goes to Donnelly. Huey is one of the best characters I’ve seen written in a musical, but it would take a special actor to pull off that role.

It is difficult with new musicals to know what to expect, which is probably why jukebox musicals are so popular – you already know that you’ll enjoy the songs. Memphis is an original musical, so fewer people might risk going to see it, but they really, really should. The songs are absolutely brilliant, my favourites right now being Someday, Love Will Stand, Memphis Lives in Me and the fantastic finale, Steal Your Rock ‘n’ Roll.

I sometimes find that London audiences can be quite reserved, whereas in Scotland the big musicals come through so rarely that everyone seems to appreciate them more. However, this was by far the best crowd I’ve been a part of. There were people whooping after the show-stopping numbers, and everyone gave a well-deserved standing ovation at the end.

The show deals with a serious subject, and there were a couple of moments when I felt a little bit teary, but it is also very funny and completely uplifting. If you liked Hairspray, get tickets for this – you might think it’s even better.

Take it from me – plenty of people have seen Memphis, loved it, and it’s well worth it!