Last Wednesday, a few friends and I headed to a rooftop cinema to see the fantastically funny Mean Girls. 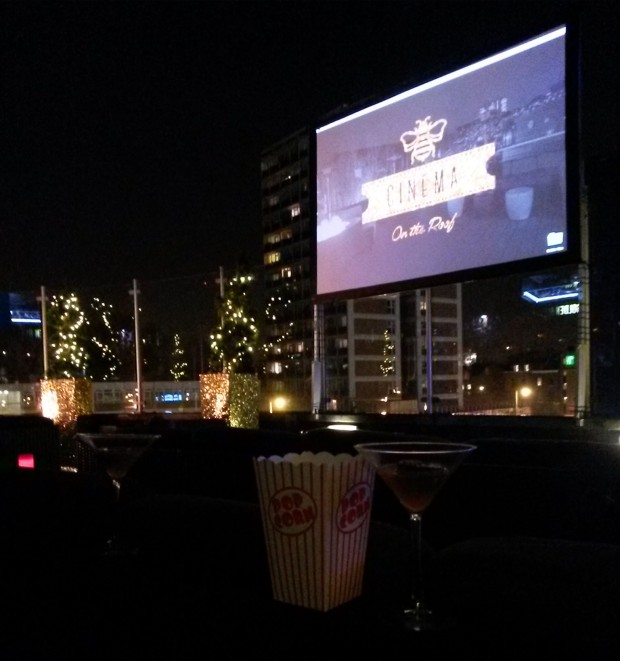 ‘She doesn’t even go here!’

Obviously, an outdoor cinema in Britain is not always going to be a genius idea. They warn you by 4 p.m. if the showing has to be cancelled due to the weather, and the lovely day only turned to rain at about five o’clock. We were worried it was going to be a bit of a wash-out, but luckily the shower was short-lived and when we arrived everything was going ahead.

The rooftop cinema was at the Golden Bee in Shoreditch (of course it’s in Shoreditch) and the bar itself was very nice. It was fairly quiet when we got there, but I suppose it was only half 6. Happy hour is 2 for 1 on selected cocktails, so I ended up with a Collins and the Golden Bee cocktail, which comes complete with chocolate bee.

The Collins was brilliant, but the Golden Bee is tequila-based, so I wouldn’t have had more than one. And that was a wise move, because the rooftop was up another two flights of stairs from the first bar. The second staircase was a narrow spiral – do they really let people up these when they’ve been drinking?

The rooftop was adorable! We walked through an archway decorated with flowers, then several sofas were set up in front of the big screen. There are standing heaters and blankets in case it gets cold, but it was a fairly mild evening and I never felt it cool once.

You get bottomless popcorn, which is a great idea, but it’s salted and not sweet. (So if I was being really picky, that’s all I’d change.) They also give you a headset, so they don’t have to go blasting the sound into the night and annoy the neighbours. It was quite funny though, because when it got to especially quotable lines, you could hear everyone joining in.

It was such a relaxed, fun atmosphere. I really enjoyed myself, and I’ll definitely be looking out for more films there in future!