We arrived at the Vatican just after eleven. I had read many warnings about the queues for St Peter’s, but it really was hilarious. It spiralled so many times in front of the church that we couldn’t even see the end, so we decided to come back later. We walked towards the river and Castel Sant’Angelo, decided not to wait in the queue there either, and went for lunch!

We crossed the river and found Piazza Navona, the main square. We chose one of the many restaurants (Tre Scalini) after seeing a picture of an amazing-looking dessert, and I ordered my first carbonara in Italy. I had built this up in my head a lot. I wrote almost 500 words about it a month ago, for crying out loud. It was a big moment… 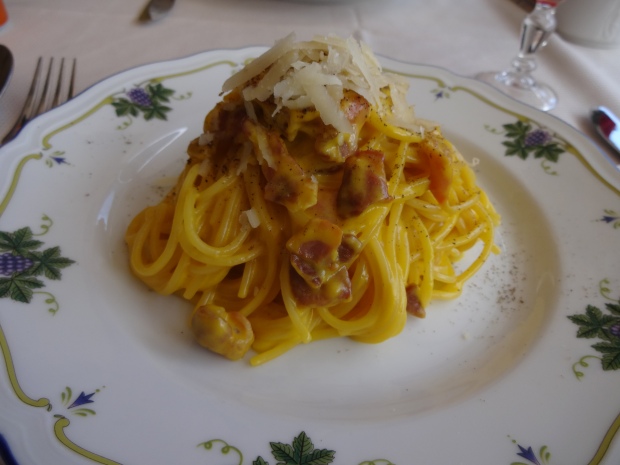 It was slightly more orange than expected. I am not sure that photograph does it justice. I did not realise that it is not traditionally made with cream. And, as amazing as the Italians are at food, frankly, someone made carbonara better. Admittedly Italian carbonara is not always that orange (the one I had on the second day looked normal) and it wasn’t bad, it just wasn’t the amazing version of my favourite meal that I was expecting. Ha!

However, it was followed by that amazing dessert, the Tartufo:

It is chocolate ice cream and chunks of dark chocolate topped with whipped cream and a chocolate wafer. I actually didn’t realise this was a big deal until I checked the name just now (apparently my holiday research was missing some key elements), but this is a five-star event on TripAdvisor. And it was absolutely amazing!

After lunch we went to the Castel, took the stairs to the top (second climb of the day after the Janiculum) and got some more great photos of the city. 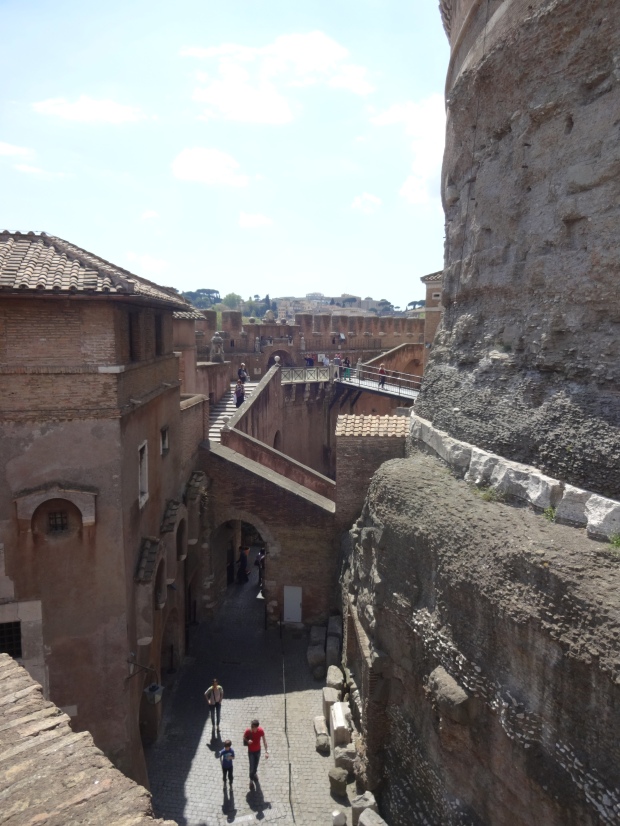 If you’re short on time, this would be one of my non-essential places to visit, although it does have an impressive history – it was first commissioned by Hadrian as a mausoleum before being used by several popes as a fortress.

My favourite part of the day was our visit to St Peter’s. We queued for about half an hour (it must have been about three o’clock by this point) and headed up the dome first. If you know you want to visit the dome, do the climb first – you will come out through the church so you can see it then, and it gets the queuing out of the way at the beginning.

It is 521 steps to the top, which might sound a lot, but it isn’t too bad. You climb around 200 initially to get to the ceiling of the main body of the church – that’s when I thought the climb was over. And I was already impressed: 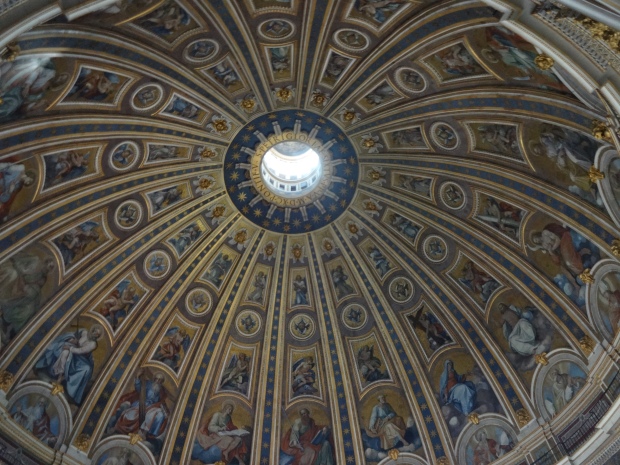 After that, though, there was the rest – leaning walls, narrow spiral staircases with no handrails, a little touch of vertigo – before reaching the very top, when you can get outside and see the whole city. It was a beautiful day and everything just looked gorgeous in the sunshine. 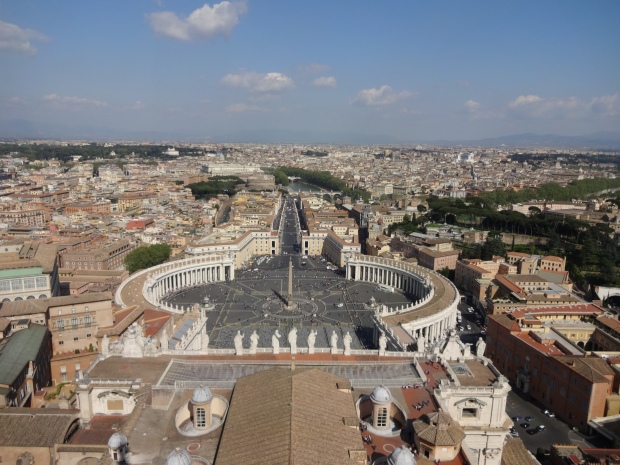 Inside, the church itself was beautiful too. This is probably one of the best places I’ve ever visited. 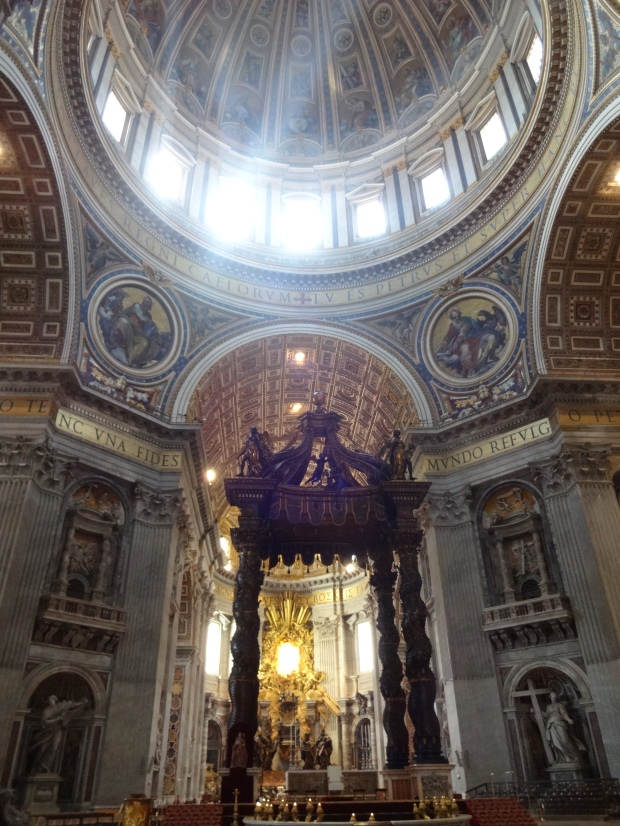 After that, we had built up an appetite again. We had booked into an evening visit to the Vatican Museums to try to avoid the crowds and make best use of the day, so we went for some dinner. We stayed nearby, on the main street in front of the church, drank Prosecco and enjoyed the sunshine! And I spotted this: 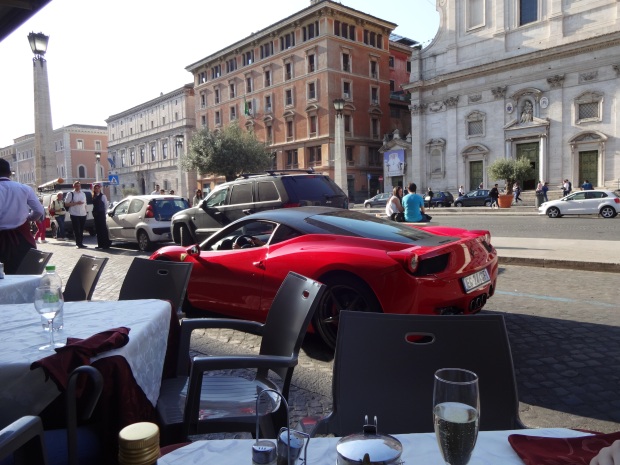 The evening visits to the Vatican would be great if you are really interested in the collection. There was no queue when we arrived and we headed straight in. However, if you aren’t particularly interested in art, like us, then this is more about checking it off the list. This is where I am a bit silly when I’m travelling, because if there is a particularly famous monument or landmark, I don’t want to miss it, even if it doesn’t immediately sound like my thing. Then again, I can’t imagine many people would go to the Vatican City without visiting the Museums. There was another great ceiling though (why do they put the best work there?):

We tried and failed to find a Van Gogh, saw work by Edvard Munch and Raphael, then the main event: the Sistine Chapel.

Again, I’m going to be honest – after St Peter’s, I didn’t really understand the fuss about the Sistine Chapel. I was imagining a totally different place in my head, so it felt a bit small and garish. Yes, it was cool to think that Michelangelo painted the ceiling five hundred years ago, but only because he’s really famous.

So after seeing some of the most famous places in the world, it was time to walk back to the hotel. After over 20km of walking, my feet were screaming at me, but it was totally worth it!

I’m going to sign off for now, but there will be a post on day two soon. Couldn’t visit Rome without visiting the Colosseum, could we?

12 thoughts on “One short day in the Vatican City”