I still get the back-to-school feeling this time of year, so it always feels like a good time to start things. This September it is back to blogging! (Plus a little makeover for the site, still in progress.)

I have no explanation for the unexpected summer off, except a total lack of motivation, and perhaps a bit of work stress, but luckily it seems to be on its way. It certainly hasn’t been for want of things to write about, so here’s an attempt to condense eight weeks of blogging into one post.

I had a few weekends in different parts of England for various events. The first was an under-the-sea theme party in a giant marquee with free food and drinks, which is just not the kind of event anyone ever hosts in Scotland – it was like being in a film. I was impressed with myself for sticking crepe paper streamers and fairy lights to an umbrella (jellyfish), and yet there were five jellyfish costumes better than mine, there was an anemone made from about 100 balloons, and, not one, but three proper boat costumes, among many others. It was so impressive. 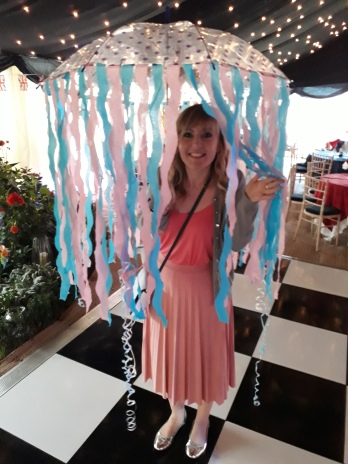 Next up was a lovely wedding! It had a casual feel: the bride wore a gorgeous knee-length dress and didn’t carry flowers, but a sparkly bouquet made from different pieces of jewellery. She’d also made giant jars of water beads for the centrepieces, which looked awesome. There was a subtle football theme, from their invitations (tickets to a match) to the wedding cake, where the front looked more traditional with flowers while the back was a tribute to their favourite club. They had a pick-and-mix trolley, which I now think is a must for any wedding. The speeches were funny and there was plenty of food, which is surely one of the most important factors as a guest. I seem to have taken no good photos, so here is the before and after of my place setting:

Adam’s family (hee hee) have a barbecue every year, so everyone made their way to his cousin’s farmhouse in Northamptonshire. The house is amazing, but the garden equally so – there were apple and pear trees, a pond, a swing set, and a bouncy castle (which I couldn’t resist going on). There were also two dogs (what more could you ask for?) and a (live) chicken. Admittedly, I preferred the dogs.

Finally, I had a trip home catching up with family and friends. I spent two days in Edinburgh for the Fringe, seeing 2016 the Musical, Jenny Collier and John Robins. The musical will never get a West End run, but was still pretty funny, and the comedians were fantastic. I also went to see the new Queensferry Crossing, before stopping in a place called Limekilns for ‘a coffee’. (I had ice cream.) 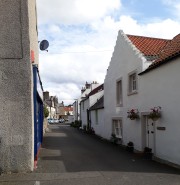 My sister and her boyfriend came to visit at the end of June, and we visited the Transport Museum. It’s an especially great attraction for families, but even we passed a good couple of hours here – big kids will also enjoy seeing inside the old tube carriages and pretending to drive a bus. Your ticket is also valid for a year from your first visit.

We went to the Harry Potter Studio Tour – again! – because it’s brilliant and because we hadn’t seen some of the newer sections. This was my fifth visit (I don’t like to think too much about how much I’ve spent on this place) and there is always something new to see. Or a new attempt to make Butterbeer less disgusting:

Definitely better than the drink.

There have also been a couple of new restaurants tried, a trip to Bedford for a barbecue, and the Harry Potter Play. (#keepthesecrets!)

I’m not sure why I didn’t read the Lunar Chronicles sooner, as this is just my type of series and I really enjoyed it. I felt like there were a few issues with pacing that I would have edited, but perhaps that was my eagerness to find out what was going to happen!

Amongst other things, I also read The Power by Naomi Alderman, which I just thought was brilliant. I hope the TV version comes to fruition!

And I am just about to start Tower of Dawn! I have been waiting a year for this.

OK, that is too good an incentive to wrap this up there! I hope you all had a good summer, and I hope to be back much sooner next time.